History of the Dish
Various legends trace coq au vin to ancient Gaul and Julius Caesar, but the recipe was not documented until the early 20th century; it is generally accepted that it existed as a rustic dish long before that. A somewhat similar recipe, poulet au vin blanc, appeared in an 1864 cookbook.

Julia Child featured coq au vin in her breakthrough 1961 cookbook Mastering the Art of French Cooking, and she frequently prepared it on the PBS cooking show The French Chef. This exposure helped to increase the visibility and popularity of the dish in the United States, and coq au vin was seen as one of Child’s signature dishes. 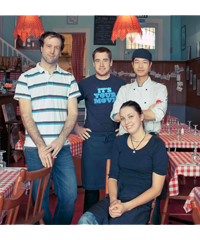 "Fantastic food and great atmosphere with comfortable decor. This place makes you feel at home and yet provides quality service and fun food. The best place in Queen street. I want to try it at lunchtime next time."